The game of energy poker is getting scarier

Old_Joe
April 30 edited May 1 in Other Investing
Russia cuts off gas to two European countries. Who’s next?

Following are edited excerpts from a current article in The Economist.

Not long ago it seemed that the game of energy poker being played by Europe and Russia, though dangerous, was under control. After all, Europe imports 40% of its gas from Russia, which in turn makes about €400m ($422m) a day from its sales. On April 27th, however, Russia upped the ante: Gazprom, a state-owned energy giant, stopped sending gas to Bulgaria and Poland after they missed the deadlines that Russia had set for paying in roubles.

The immediate effect of Russia’s latest move, which the EU has described as being a breach of contract, is limited in scope.

Exactly who might be cut off next is not clear. The stakes are high. It is not that Europe needs the gas now: as temperatures rise, consumption is ebbing. But the bloc’s stocks are only at 33% of storage capacity. The European Commission has urged member states to ensure that their facilities are 80% full by November, implying a spike in demand to come.

Still, if Russia were to cut off big importers, it would deprive itself of some of the cash it needs to fund a costly and protracted war. So who will fold first?

One country being cut off could have knock-on effects on others, for instance if gas transits through it to other places. Nor is it clear whether Russia might eventually turn the taps off anyway.

If Germany, say, were cut off, gas markets would go haywire. European prices are already six times higher than they were a year ago. They would soar to new peaks, luring more LNG from the rest of the world and causing prices elsewhere to rise in turn. Jack Sharples of the Oxford Institute for Energy Studies, a think-tank, reckons a full shutdown of Russian gas to Europe may well cause a global recession. Russia’s game of poker is getting scarier—and those losing their shirts could include bystanders, too. 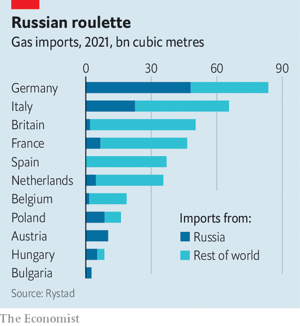